Solidarity is frequently talked about and sometimes taken for granted in the labour movement.

But when hundreds of labour activists came from across Canada to picket with locked out refinery workers in fierce winds on the frigid Saskatchewan prairie, its power was real, and appreciated.
That’s exactly what happened after about 730 Unifor Local 594 workers were locked out last December by the Federated Co-operatives Ltd.
“People I don’t even know came here, and it touched us all,” explained Crystal Brittner, wife of one of the locked out workers.
“I have never met these people before and I have come down and walked the picket line with them. I have talked to them,” Brittner said on a bitterly cold afternoon when she and another spouse Jennifer Shupe, handed out hand made thank you cards with wild seeds for the out-of-town pickets to take home and plant to remember the gratitude of their Unifor sisters and brothers.
“I said thanks for coming and not one said you are welcome. They said It’s my pleasure to be here, or it’s where I need to be,” said Brittner while explaining how difficult the lockout has been for her family, especially her children who did not fully understand the sacrifices they were making as a family.
“I don’t have words to explain how all of that made me feel and how much I appreciate having these people come and do that.”
Shupe said the cross-Canada show of unity meant a lot to the locked out workers and their families, especially as they dealt with the deep, difficult divisions in the community that the lockout brought.
“This has divided our families. It has divided our communities,” Shupe said.
“We just wanted to say thank you to everybody for everything you have done for us, for our spouses, and for our families, because it has been an incredibly hard time for us.”

Local 594 members knew they were in for a fight. Federated Co-operatives had built a scab village inside plant gates before the the contract expired. The provincial government turned a deaf ear to workers’ demands for a mediator. And, Regina police seemed more like a company security force than public police force. They towed locked out workers’ cars from the side of the highway, removed warming trailers and toilets while temperatures reached minus 30 Celsius. Police Chief Evan Bray called pickets “borderline terrorists”.
Union leaders — national President Jerry Dias, Local 594 president Kevin Bittman and Lance Holowachuk — were arrested on the picketline. More Local 594 were arrested as well.
The company, that was making about $3 million a day before the lockout, sought massive fines and jail terms through the courts in attempts to cow Local 594 members.
The Federated Co-op, Regina police and even the courts all seemed stacked against Local 594 members’ fight to retain their pension plans, and their jobs when Unifor put out the call for help.
Unifor members from all over Canada responded. Some 900 union activists grabbed their cold-weather gear, left their own jobs, their own homes and families and joined the picket lines on the frozen prairie on the outskirts of Regina.

Out-of-town pickets came from across Canada to walk eight to 12-hour shifts with their locked out sisters and brothers.

Luc St-Armand, a member of Unifor Local 29, skipped his son’s birthday and travelled all the way from Edmunston, New Brunswick where he worked at the Twin River Papers pulp mill to support the locked out refinery workers.
“It’s a big country. We are all brothers. We work to keep our pensions going. If they start doing that everywhere, we are going to loose the little bit of our pension that we have,” St-Armand said.
“It’s cold, but everyone is happy. We talk to all the members.
I am happy to be here and give them a hand.”

Rachel Duncan, an autoworker from Local 4451 in Stratford, Ontario, said she was there, because “Unifor is my union as well as their union. We have joined with the rest of our country and the rest of our membership to come out here and support them to show the rest of the world what our union is capable of so they don’t end up getting pushed around.”
Duncan said Regina was “cold,” but it was all worthwhile.
“The experience has been that of camaraderie. The people who have come out here have shown a lot of solidarity. If they are coming for you now, they are coming for us next.”

Bryan Jones, a pulp mill worker from Local 855 in Hinton, Alberta, spent more than 25 days on the line.

“This battle though it’s deeper for Local 594 members goes far deeper for the labour movement in Canada. If a bastard employer like FCL is allowed to run rampant over pensions, working conditions, membership and every little thing that they want to, they will set a precedent that is terrible for everyone in Canada,” Jones said.
After almost a month on the line, Jones was still enthusiastic about the experience.
“It’s great. I have met people from all over Canada right from one end to the other, from Newfoundland right to B.C., and it’s been awesome.”

John Harding, a retired autoworker from Mississauga, Ontario, said he could not stay home and enjoy retirement while FCL attacked Local 594 members’ pensions.
“I came here to support our brothers who are struggling to get a contract. If they do not get a contract other companies are going to follow the same suit,” Harding said.
“We are freezing here, but it’s worth it.”

Pressure from Local 594 and Unifor workers across Canada finally persuaded the Saskatchewan government to appoint special mediator Vince Ready to try and resolve the dispute. 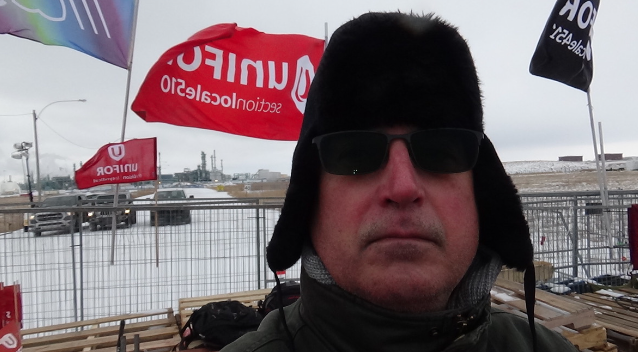 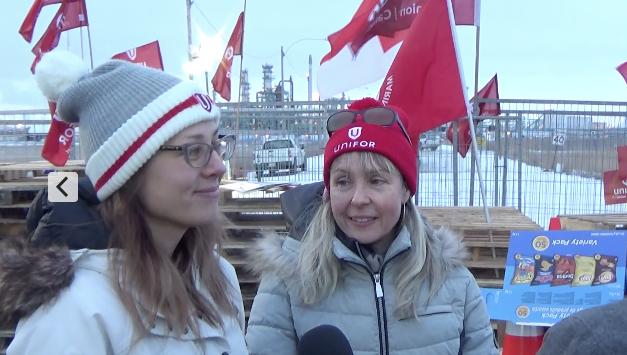 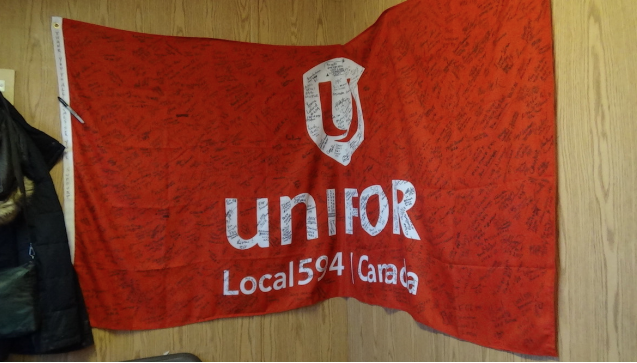