The union representing journalists and photographers at the Chronicle Herald (the Halifax Typographical Union) and Herald management have reached an impasse in labour negotiations. Herald management recently filed a notice that gives them the option to lock out its unionized newsroom staff and it has recently come to light that the Herald is soliciting freelancers and journalism students to act as replacement labour. The HTU has asked freelancers not to accept work from the Herald during a lockout. 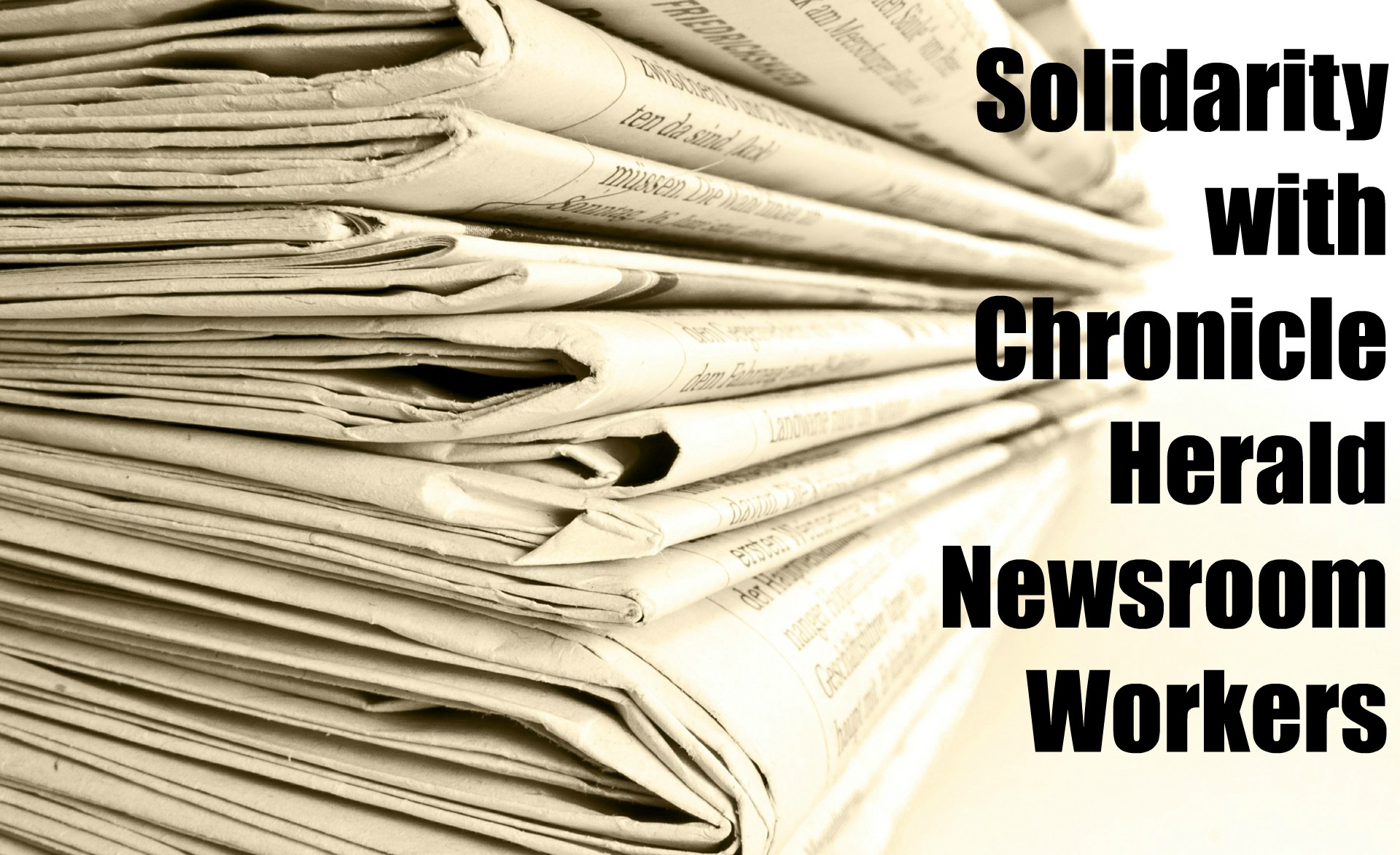 A lockout is when an employer does not allow its unionized employees to come to work, enter the premises, or collect pay. This is done to pressure the union into accepting the employer’s proposal during contract negotiations.

A strike is a work stoppage initiated by unionized employees to demonstrate the importance of their labour and pressure the employer to negotiate a fair contract. A strike is a last resort for workers as it means giving up regular work and pay, requires them to spend hours on a picket line (regardless of weather), and puts stress on them and their families. However, a strike is one of the only tools that returns some power to the workers.

1. It undermines the unionized workers’ position

If management is able to find non-unionized, temporary employees (who may be paid less and not receive benefits) to keep the paper running smoothly during a strike or lockout, there is less incentive to return to the table and negotiate a fair contract with their unionized employees.

As freelancers, withholding our services keeps the pressure on Herald management to negotiate with the unionized workers and may help shorten the length of the lockout. Then the unionized employees can go back to work and freelancers can again pitch to and accept work from the Herald.

It’s important to remember that these union members are fellow journalists, photographers and editors. They are our colleagues, sometimes co-workers and friends, and it is important to support them during this difficult time.

The Director of the King's School of Journalism, Kelly Toughill, talking to the Halifax Media Co-op about the impact of freelancers taking work during a lockout or strike: “I can't tell people what they should do with their lives. However it can actually injure their reputation with fellow journalists and potentially make it more difficult to be hired in other outlets later if they're perceived as somebody that's divisive within the journalism community.”

3. Challenging the idea of freelance as cheap labour

In a 2014 Coast article, Chronicle Herald President and CEO, Mark Lever, was quoted as saying “freelance is obviously a very cost-effective way to provide content for our publications.”

Hiring freelancers is seen as a good way for a media outlet to save money because they (often) get away with paying us less and they don’t have to pay for benefits (such as health and dental).* As the number of well-paid, full-time, permanent and unionized jobs continues to decrease, more people are turning to freelancing as their main source of work and income. Whether by choice or necessity, many media sector workers are making freelancing their life’s work.

It is important that, as freelancers, we challenge the idea of freelance as cheap and disposable labour. Our livelihoods depend on it.

*The Canadian Freelance Union (CFU) advocates for better rates for freelancers and provides members with access to health and dental plans.

The wages and benefits of our unionized colleagues are something that many of us aspire to. As the salaries and benefits of full-time, permanent, unionized staff diminish, so too will rates for freelancers. And the cycle will continue: low freelance rates may lead to the employer wanting to further reduce full-time workers’ wages.

5. Fewer good jobs for everyone

While many freelancers choose to freelance (because of the flexibility, variety, creativity it allows etc.), many of us are freelancers because there is a dearth of well-paid, permanent, unionized jobs available in the media sector. If we don’t stand up for these types of positions now, they will not be there for us, and our colleagues and friends, in the future.

A main point of contention in this round of negotiations has been the Herald’s move towards “advertorial” content, i.e. ads masquerading as articles. Though taking work from the Herald during a strike or lockout may be good for a freelancer’s finances in the short-term, increased advertorial content (not created by newsroom employees) means less work for journalists, photographers and editors in the long term.

As freelancers, we know how difficult it is to turn down paid work and that it’s not something that everyone can do. You have to make the decision that is best for you. If you do have the means, we encourage you to consider the above and stand in solidarity with the unionized workers at the Chronicle Herald.

About the CFU: The Canadian Freelance Union (CFU) is a new kind of union. We represent hundreds of members across the country working as freelance writers, reporters, broadcasters, graphic artists, photographers, videographers and filmmakers, translators, web designers/developers, campaign strategists, event planners, and project managers. For more information or to become a member, go to http://www.canadianfreelanceunion.ca/.